The upper jaw is usually the one undergoing expansion.  Expansion of the lower jaw is occasionally utilized, but a very unusual and dubious treatment. Expanders can be fixed (glued in) or removable. 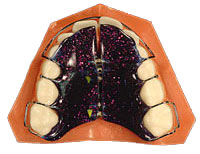 Broadening the Smile – A dubious treatment:

Expansion for any reason other than Posterior Crossbites or Crowding is dubious.  While some doctors try to “broaden” the smile via expansion, this “broadening” is not supported by the literature in orthodontics.  In fact, the literature would advise against “broadening.”

Children with crossbites should be treated as early as reasonable (generally not earlier than 5 years old if possible). Since children are growing, crossbites tend to force the jaw into non-centered positions, and the jaw can grow off center during childhood growth.  Additionally, crossbites of children results in TMJ problems over time.

Adults with crossbites should also be treated, but some level of TMJ damage will be apparent on the jaw joints (sometimes debilitating damage).

Rapid maxillary expansion (RME) in the adult is thought to be an unreliable procedure with several adverse side effects and, consequently, surgically assisted RME is considered the preferred procedure. The purpose of this paper is to study the efficacy of nonsurgical RME, and to determine the incidence of complications such as relapse of the expansion, pain and tissue swelling, tipping of the molars, opening rotation of the mandible and gingival recession. Rapid maxillary expansion using a Haas expander was examined in 47 adults and 47 children. A control group of 52 adult orthodontic patients who did not require RME was also studied. Students’ t-test, and the analysis of variance followed by the Scheffé test were used to determine if there were significant differences among time periods and among the 3 study groups. The mean transarch width increase was similar in adults and children who had RME; 4.6 ± 2.8 compared to 5.7 ± 2.4 mm for the molars and 5.5 ± 2.4 compared to 5.7 ± 2.5 mm for the second premolars. In the adults, transarch expansion and the correction of the posterior crossbites were stable following discontinuance of retainers (mean 5.9 years). If the expander was properly fabricated, and turned no more than once a day, the procedure was well-tolerated. Rapid maxillary expansion in adults flared the molars buccally only 3° per side. The mandibular plane and lower facial height were unchanged. The adults achieved 18% of their transmolar expansion at the height of the palate and the remainder with buccal displacement of the alveolus. The children achieved 56% of their expansion by an increase at the height of the palate with the remainder due to displacement of the alveolus. There was some buccal attachment loss (0.6 ± 0.5 mm) seen in the female subjects associated with RME, but the extent was clinically acceptable. This resulted in significantly longer clinical crowns, but rarely caused exposure of buccal root cementum. Complications were infrequently observed or of minimal consequence. The results indicate that nonsurgical RME in adults is a clinically successful and safe method for correcting transverse maxillary arch deficiency.

Rapid Palatal Expansion in the absence of Crossbites:  added value?

As noted in a recent article, interest in rapid palatal expansion (RPE), which has traditionally been used to resolve crossbites, has increased markedly in the past 2 decades. Orthodontists using this procedure might be seeking to gain arch perimeter to avoid extractions. This treatment, which is most often started in the mixed dentitition, raises some interesting questions. One question is this: In the absence of a crossbite, is RPE necessary to gain arch width to avoid extraction treatment? If so, then is the maxillary arch perimeter the determinant in the extraction-nonextraction decision?  Inconveniently, it is not the determinant, thus the flawed use of RPE in the absence of crossbites.

These questions are fundamental, because using the maxillary arch to decide whether to extract challenges the concept of mandibular arch-based diagnosis and treatment planning.

For this reason, it might be useful to evaluate the rationale for RPE treatment in the correction of crowding.  RPE increases the perimeter of the maxillary arch and can provide space to correct moderate (3-4 mm) amounts of crowding. Because no treatment occurs in the mandibular arch, a logical question is this: How is space to be gained to resolve crowding in the mandibular arch? One view is that expansion of the maxillary arch is accompanied by spontaneous transverse expansion of the mandibular arch, with the implication that space would be available to resolve any lower arch-tooth discrepancy. This supposition is easy to assess because there are adequate data; The conclusion is that any spontaneous expansion provides almost no space to resolve crowding.

It might be a demanding task to justify the use of RPE in the absence of crossbites, particularly because any correction of the molar relationship could be unstable.